The New Ray (from the Old but Robust Torch)

The very first creatures to evolve into modern human beings by walking on two legs and innovating modern civilization such as making tools and weapons, building houses, growing crops, domesticating animals and entertaining themselves with music, dance and stories, were in the East African region – especially in present day Uganda and Tanzania. These original human beings then spread out and populated the rest of the world where they changed both physically and culturally in response to the different climatic and geographical conditions.

Later these transformed Africans from the diaspora returned to the continent in search of wealth and tried to dominate the ones who had stayed by wiping out the indigenous cultures. Before these civilizations could be totally wiped out, Rwangyezi Stephen founded Ndere Troupe in 1984 as the thread to recapture, learn, develop and repopularize this world heritage against all odds. The advent of COVID-19 is threatening to be the final razor to cut the human civilization thread.

More About the Performers 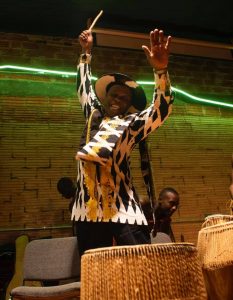 Born in 1955 in Kyabanyoro – Itojo – Ntungamo District,  Dr. Stephen Rwangyezi is the Founder and Executive Director of Ndere Troupe, Ndere Cultural Centre, Ndere Foundation and Ndere Safaris. His commitment to resuscitate Uganda’s culture and his professions both as a teacher and economist have made him write, direct and stage 24 theatrical plays, act in international movies like War Child and The Last Kind of Scotland, produce 5 Ugandan musical albums, cause and make tours to the whole world, Found and Chair the Uganda Development Theatre Association (UDTA) which is formed by over 2,000 cultural dance groups dotted allover Uganda that have put Uganda’s culture back to life.