Join Indigenous Drag artists Stone Motherless Cold (Arrernte), Cerulean (Meriam), Mora Money (Wiradjuri), and Rose Mary (Atayal/泰雅) in a conversation that explores the future of drag as its past. Curated and facilitated by Oyana (Haitian-American)

Pretext:
This conversation is inspired by the life and work of William Dorsey Swann (c. 1858 – 1925). Swann was a queer Black-American born into slavery, an American queer liberation activist, the leader of a queer resistance group, and the first known person to self-identify as “The Queen of Drag”. There is ample evidence to support the existence of Indigenous LGBT+ culture that predates colonial invasion. Thus, it is a sound argument to make that the drag culture that originated in the USA was a recontextualization of a continuum of indigenous queer rituals expressing themselves during an ongoing colonial invasion. The legacy of drag balls and drag culture is deeply enriched with queer Black and Indigenous liberation and empowerment.

Context:
This cultural legacy has shifted into the mainstream and has been subjugated into a colonized, reappropriated, and gentrified product to feed an ongoing capitalistic invasion of Indigenous lands. These invasions have enforced a pejorative narrative of non-binary gender and sexuality to justify a system that steals land, bodies, and culture.

The contemporary pop culture of drag has been brought to the global limelight by RuPaul’s drag race: however, the cost has been the erasure of this cultures’ origins. An origin that is rooted in the legacy of Black and Indigenous queer resistance to western colonial paradigms.

This panel will dissect the layers of the biospheric impact of a black and indigenous American queer liberation art form on indigenous communities outside of Turtle Island. Seeking to answer an urgent and pressing question: “ How do Bla(c)k and Indigenous queer people outside of Turtle Island see and represent themselves in the queer liberation artform of Drag?”

More About the Performers 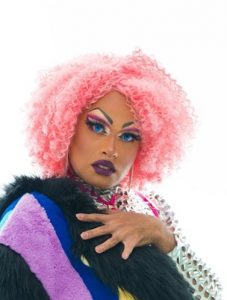 Cerulean (she/they) is the current reigning Miss First Nations 2021 representing the Meriam / Erub Kebi Le people from the Torres Strait Islands. A frequent performer throughout the queer scene in Melbourne, she’s seen many stages from independent festival shows to late-night club drag performances. She is an expressive blue gem who descended from the Pisces constellation to bless mere mortals with a raining cloud of excitement, energy, and fun! Her body morphs into an ensemble of contrasting forms, exploring conceptual performance. 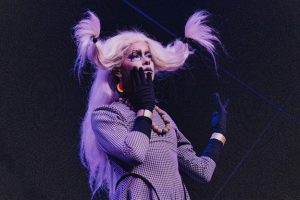 Stone Motherless Cold (she/they/re) is a proud Arrernte Sistergirl gem, based in Naarm. Using drag as their main medium they dabble in spoken word and visual art. One of the title winners of the VIC NAIDOC LGBTQIA+ 2019 event and first runner-up Miss First Nations 2021. She has worked on ‘The Fae’ 2021 (Yirramboi), ‘Drag of Kwatye’ 2019 (Melbourne Fringe Festival), ‘Dis Rupt’ 2019 (Yirramboi) and ‘Lets Take Over presents: The Reveillon’ 2019 (Northcote Town Hall). 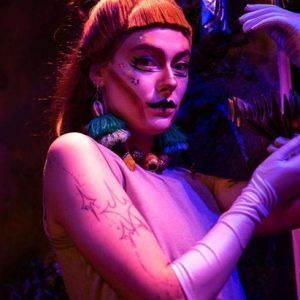 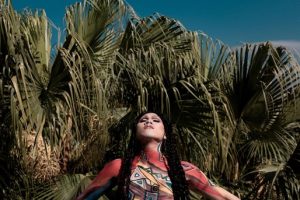 Rose Mary started her journey as a drag queen in late 2017. She describes herself as beautiful as roses but without the thorns and invasive scent. Instead, she wants her drag to be as approachable, fresh, and unique. Yet, everyone likes to put some spice in their everyday meal, just like the spice rosemary. She’s of Atayal descent. She didn’t incorporate Atayal culture with drag till the contest “Miss First Nation” was exported to Taiwan. It’s been such an impact for her that now she’s been exploring and creating opportunities of bringing the elements of Atayal to the world of drag, with being respectful yet retaining the spirit of the culture. She went from simply trying to entertain the audience, to entertaining the audience with a heart of gold. 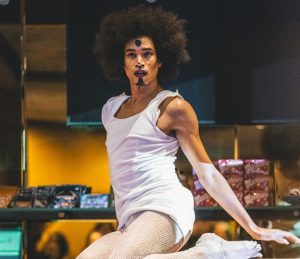 Oyana (she/her/hers) is a Haitian-American performance and visual installation artist. She holds a A.A. in Theatre and Dance from Casper College, an alumnus of Alonzo King’s Lines Ballet Training Program, and a self-taught visual artist. As a dancer, she has worked with many notable companies including Texture Contemporary Ballet , Staycee Pearl Dance Project, and Cleo Parker Robinson Dance Ensemble, and HaitiDansCo. She has been a resident artist at The Indy Convergence and Pearl Diving movement Residency (Madonna Gris), as well as presented original Movement installations for Santa Fe Outdoor Visions Festival , The Stars Hold Our Stories, Taint Caberet (Naarm/So-called Melbourne, AUS), and as a part of Dis rupt (Yirramboi Festival).